US Congressmen Calls For Probe Into The Anglophone Crisis

More members of the United States Congress are requesting the country should urgently intervene in solving the on-going crisis in Cameroon’s North West and South West regions.

Reacting to petitions from some 13,000 Cameroon-born American citizens living in Maryland, USA, two Congressmen, Anthony G. Brown and Jarsie Raskin on June 27 wrote a letter to Rex W Tillerson, American Secretary of State. In the letter, they request the state department to take a stance that would end the persecution of Cameroon’s minority English-speaking citizens. 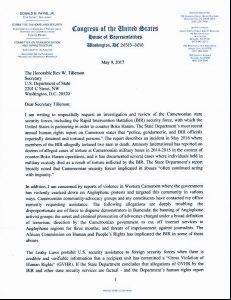 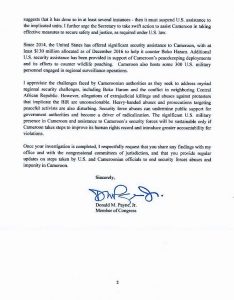 They express their worries about the situation in Cameroon while noting that Secretary, Tillerson is aware of the events unfolding in the West Central African state. “As you know, unrest has increased in Cameroon since late 2016, when thousands of members of the country’s Anglophones community began demonstrating in opposition to policy changes that have further marginalized the community. The Cameroonian government’s response to the protests have been concerning”, the letter reads in part.

Citing a report by a top American newspaper, The Washington Post, the congressmen in their letter, note that 100 protesters were “violently arrested” in November while four people were killed with live ammunitions at a later protest in December.

Going by Hon. Brown and Hon. Raskin, the US Department of State has not yet issued an official statement on the crisis and their impact on the rights of Cameroonians since November 28, 2017.

Both Congressmen are requesting the Department of State to respond to their letter by stating the actions the American government is planning to take with regards to the “political ad humanitarian situation in Cameroon particularly regarding any circumstances of excessive force being directed on the Anglophone Community.

Congressmen, Anthony G. Brown and Jarsie Raskin are however not the first in the US Congress to have expressed concerns over the Anglophone crisis in Cameroon. Donald M Payne Jr, Member of the Congress of the United States earlier this month, wrote to Rex W Tillerson on the same subject. So too did Congresswoman, Jackie Walorski write in March 2017 against reported rights abuses in Cameroon.