Cameroon Should Return To Federal System, US Diplomat Says 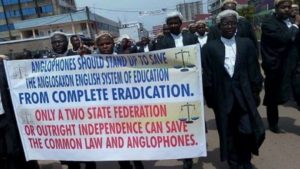 A former United States Ambassador has advocated for a return to federalism as a solution to the escalating Anglophone crisis in Cameroon.

Cameroon was under Federal rule from 1961 when the former British Sothern Cameroons and the French Cameroun came together until 1972 when a referendum organised by the first President Ahmadou Ahidjo abolished the system.

The crisis in the English-speaking regions of Cameroon sparked off in November 2016 when teachers and lawyers took to the streets to demand reforms amongst which was a return to the federal system of government.

The protests later turned violent as the population took to the streets in support of the striking teachers and lawyers.

The crisis has since morphed into an armed conflict as a faction of the population calls for the independence of the former British Cameroons of the French-speaking part.

The North West and parts of the South West regions have been under constant curfew for the past months as the violence escalates forcing thousands to flee their homes into neighbouring Nigeria.