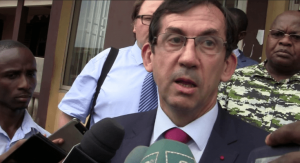 The French ambassador to Cameroon has ordered all French citizens to leave northwest and southwest regions to “safer” regions. Mr Gilles Thibault the French ambassador who took over duty in Cameroon on September 23, 2016 made this statement over radio equinox, a local radio in Douala.

According to Monsieur Thibault, the two regions are no longer safe for habitation to foreigners. He cited the case of four Tunisia road construction workers who were recently kidnapped in Indian division of the southwest region. In the the attempt to free the four Tunisians, one was killed in a crossfire that involved the Cameroon defence force and the Ambazonia defence force.

French has a lot of interest in Cameroon because they control SONARA, the petrol refinery company located in Limbe of the southwest regions. The are virtually involved in the exploitation of timber from the rich forest reserve in manyu division still in the southwest. Lastly the Bakassi oil region which is said to be one of the richest oil zone in Africa south of the Sahara according to many is as well under the control of the french.

France and British after the defeated German in the first world war decided to ceased the German colony of Cameroon as punishment for causing the first world war. When they took Cameroon from the Germans, they tried the condominium, which was a joined administration between Britain and France in Cameroon. Obviously, the condominium as there existed remarkable differences between Britain and France, such as language, education system, colonial policies and many. As the condominium failed, Britain and France finally partitioned Cameroon according to the milner-simeon agreement of 1922.  Milner was the British minister of external affairs while Monsieur Simeon was French minister of colonies.

Britain decided to rule her part of Cameroon as part of her colony of Nigeria, while France rule her own as part of French colony in French Africa. As the wind of change began blowing across Africa with the rise of nationalism, Nigeria obtained her independent from Britain on October 1, 1960 and a plebiscite was conducted by the united nation trusteeship commission. British southern Cameroon which was hitherto ruled as part of Nigeria was asked the two alternatives, that is” will you like to achieve independence by joining Nigeria or French Cameroon” ?

French Cameroon had her independence from France on January 1, 1960. As a result of the plebiscite which was conducted on February 11, 1961, British southern Cameroon decided to join French Cameroon as separate entity with a federal system of government with two equal state. 12 years after, that precisely on may 20, 1972, Ahamadu Ahidjio changed the federal constitution to a unitary constitution.

This led to the Genesis of the anglophone marginalization and in 2016 the anglophone desire of equality led to massive arrest of leaders and indiscriminate killing. Today the anglophone separatists are also armed and this has led to panick by the the French government until yesterday March 25, 2018, the French ambassador ordered the evacuation of French citizens from the English speaking regions of Cameroon.

What could be the possible implications of this action by the french government. Please let us know what you think in the comment section.