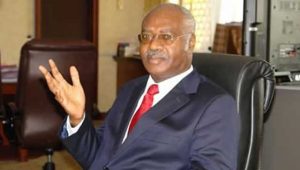 Philemon Yang, Cameroon’s Prime Minister, has instructed members of Government to categorize missions abroad at all administrative levels in strict compliance with the provisions of the Decree of 13 March 2018 which amends and supplements the Decree of 13 September 2000 to lay down travel regulations for State employees.

The Head of Government ended his statement by prescribing the implementation of measures to reinforce the practice of bilingualism in the public administration, as prescribed recently by the National Commission for the Promotion of Bilingualism and Multiculturalism.

These measures include (i) the use of both official languages on signs and other communication and information tools intended for users; (ii) the use of both English and French during meetings; (iii) the dissemination of education and awareness-raising programmes on the practice of bilingualism on State media.

The Meeting then listened to the statement of the Minister of Public Works on the implementation of road and motorway infrastructural projects, which revealed that the network of asphalted roads is expanding significantly. It has increased from 5,24.0 to 6,760 km of asphalted roads between 2010 and 2016, with a target of 9,558 km by 2020, in accordance with the goals of the Growth and Employment Strategy Paper.

The Minister of Public Works pointed out that the key roads under construction cover a total of 2,883 km of national, regional and communal roads, for an estimated overal1 cost of CF AF 1,650 billion. The road network will expand significantly thanks to the construction of roads under the three-year emergency plan to speed up economic growth.

The first 7 stretches covering a distance of 356 km are already under construction. The main difficulties faced in the implementation of road projects include the late release of rights of way, the unsatisfactory performance of selected companies, and payment delays. Regarding the implementation of the motorway programme, Government has started the construction of the Yaounde- Douala and Kribi-Edea motorways, under the auspices of the Minister of Public Works.

As for the Yaounde-Douala motorway, it is being implemented in two phases with the first phase covering the Yaounde-Bibodi itinerary of 60 km with connecting roads, while the second phase concerns the Bibodi-Douala stretch of 140 km.

The Minister of Public Works revealed that the implementation rate of the Yaounde-Bibodi stretch stands at about 60 %. With regard to the construction of the Kribi- Edea motorway, rehabilitation works on the Kribi-Lolabe stretch have been 79% completed and its tentative reception date is June 2018.

Technical studies are underway with a view to .construct the Bibodi-Douala and Kribi-Edea stretches, the Douala-Limbe motorway and ringroads in major towns. Speaking after the Minister of Public Works, the Minister of Posts and Telecommunications first noted the complex nature of cyberspace and related threats, due to its intangible and highly technical nature, before dwelling on guidelines of the strategy to fight against cybercrime and delinquency.

This strategy aims to prevent and monitor criminal abuses observed in the use of digital platforms, through three major pillars:

(i) the establishment of a subscribers identification and online communication monitoring platform; (ii) the implementation of a conversation monitoring system on social media, through the Internet and its derivatives; (iii) the promotion of the responsible use of the Internet by implementing an awareness-raising campaign plan aimed at curbing numerous delinquencies observed online.

The Minister of Posts and Telecommunications concluded her statement by specifying that the national cybersecurity strategy that is currently being elaborated will help to make Cameroon’s cyberspace safe, with the potential to guarantee economic development thanks to Information and Communication Technologies. This strategy integrates technical and organizational mechanisms, with focus on strengthening the capacities of institutional actors and adopting effective cyber laws.

Following discussions after the statements, the Head of Government instructed the Minister of Public Works to take all necessary measures to ensure the proper implementation of various ongoing road and motorway projects.