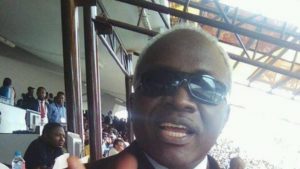 That is according to a radio communiqué broadcasted over the airwaves of State broadcaster, The Cameroon Radio Television, CRTV.

The popular sports broadcaster has not been seen at his job site for months forcing his bosses to pass an announcement to request for his return to his duty post or face disciplinary sanctions.

“Mr. Fon Echekiye Ignatus, a senior journalist assigned to the Radio house and who has not taken service since then, is called upon to report urgently to his duty post, without which disciplinary sanctions will be taken against him,” Alain Belibi, Director of the radio said in a statement.

Since he was transferred from the Television house in Mballa II to the Radio house in Nlongkak, Fon Echekiye has not showed up at his job site raising several questions of his wehereabouts.

It is not clear if he has resigned but one thing is certain, his whereabouts are unknown since the past four months even to his colleagues.