Eto’o to visit Anglophone regions in back to school campaign 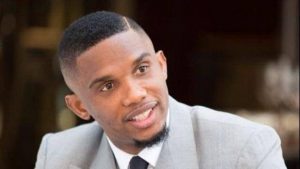 This is an outcome of a meeting between the former indomitable Lions captain and the Minister of Secondary Education, Pauline Nalova Lyonga Egbe on Tuesday at the ninth floor of the Ministry of Secondary Education.
Samuel Eto’o who is spending his holidays in Cameroon will use the opportunity to visit the North West and South West regions to encourage parents to send their children to school at the start of the next academic year.

With the move, the government intends to use the footballer’s popularity to bring things to normal in the two regions which have been paralysed for close to two years with the ongoing Anglophone crisis.

School turn out has been very low in the two English-speaking regions of Cameroon since the crisis broke out in October 2016 as school boycott was employed as a tactic by the striking teachers and lawyers.

However, the escalation of the crisis has forced many schools to shut down from threats from unkown persons while the UN says at least 40 schools have been burnt down in the troubled regions following an upsurge of violence.

It is now left to be seen whether the former Indomitable Lions’ captain can succeed in this back-to-school mission after a similar attempt by Rigobert Song failed to produce the expected results.

Samuel Eto’o also presented a project of sports and studies to the Minister of Secondary Education which he intends to put in place with the help of the government which will help young Cameroonians achieve their dreams.
The striker was appearing in public for the second time this week since arriving Cameroon after he was spotted at the Caf Excellence centre in Mbankomo during the MTN Elite I ecounter between Dragon of Yaounde and Yong Sport Academy of Bamenda that ended goalless.

Senator Warns: Anglophone May Never Have A Place In HTTTC Kumba
Share