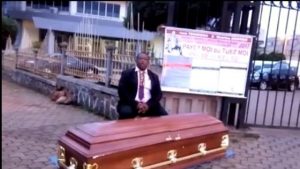 Former technician at the Cameroon Radio Television Isidore Modjo has spent his first night at the Gendarmerie du Lac in Yaounde after he was arrested for striking infront of the Ministry of Communication.
Isidore Modio was arrested on Tuesday morning with a coffin as he continued his normal sit-in strike to request for the payment of his rights for jingles he created while working for the State broadcaster.

He has accused of witchcraft and violation of moral values.
Isidore Modjo is the author composed the jingles of the national station which has been used for the past 20 years and is claiming 50 million Francs as author’s rights.

However, he claims to have received just 21 million francs despite instructions from the Prime Minister for the total sum to be paid.