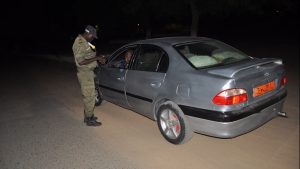 The general delegate to the National Security (DGSN, police) of Cameroon, Martin Mbarga Nguele asked all the regional delegates and “on very high instructions of the head of the State”, to take appropriate measures to reinforce, without unnecessary hassle, the control of the road traffic of administrative and military vehicles.

Based on the “current security context”, and “in order to avoid the opportunistic penetration of dangerous people and equipment in Cameroon”, he also prescribed the systematic verification of the records of said cars and the identification of their occupants.

According to sources familiar with the matter, interviewed by APA and speaking on condition of anonymity, the boss of the police intends to stop the phenomenon, which is gaining momentum and particularly in the English-speaking regions of North West and the Southwest, secessionist assaults against checkpoints and command posts.

It thus appeared,  the same sources say that secession activists in these areas were seeking, during these attacks, weapons, ammunition and other logistical means belonging to the defense and security forces, with whom they hope to attack by surprise positions held by the regular army.

In parallel with the prescriptions of the DGSN, the governor of the South-West region, Bernard Okalia Bilai, has just asked, still by message, to the prefects, commander of the gendarmerie legion and other heads of police units the reinstatement of the mixed control points at the level of strategic roads, including the entrances and exits of urban centers.

Checks will be accompanied by systematic searches of vehicles and passengers on board.

This redeployment, says the governor, is a response to “the attacks and kidnappings perpetrated by secessionist terrorists,” recently recorded in the heart of some urban centers administrative units

It is noted that this reinforcement of security, in English-speaking regions, coincides with a new increase of tension following a slogan launched by a secessionist group called Victoria Shark Battalion, inviting the populations to respect all the texts and regulations of the Federal Republic of Ambazonia, which he wants to guarantee.

In this call, widely distributed on social networks, activists also invite Francophones living on “their” territory, for business or professional reasons, to evacuate “their” territorial space between June 1 and June 3, 2018, any resistance to these warnings being likely, as of June 4, to expose “to serious consequences”.

Previous Elecam voter registration hit by Anglophone crisis
Next Bible Translators Among Those Killed, Forced To Flee Violence In Cameroon