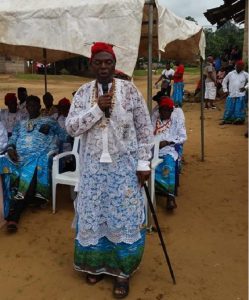 The paramount ruler of the Balondos, chief of Ekondo Titi, Ndian Division, South West Region of Cameroon Stephen Isoh Itoh is feared death after a gun attack on Sunday August 12.

Gunmen reportedly stormed a local Baptist Church in his Chiefdom this Sunday morning and shot him. Reports say he was pulled out of the church and shot while others indicate that, the attackers confronted him as he returned home from church.

The traditional ruler is feared to have died from the gun attack on the spot. Worshippers are reported to have been gripped in awe minutes after the incident struck.

Esoh Itoh occupied the throne of the second class Chiefdom of Ekondo Titi. He is a former president of the Southwest Chiefs Conference, SWECC. Etoh is among the most respected and active traditional rulers in the South West in the political, social and cultural spheres.

The king of Balondo extraction exuded uncommon wisdom in the management of societal issues. He is known to have been the political tranquilizer of power sharing deals among sons and daughters of different tribes within Ekondo Titi Sub Division.

In the cultural domain, the Ekondo Titi kingpin was the president of the Oroko Language Development Association, OLDA. He marshaled the translation of the Jesus film into the Oroko language.

Speaking on June 30, 2017 as chief-launcher of the Oroko Jesus film at the Presbyterian Church, PCC Mile Kumba, Itoh surmised that “ there is no dignity for those who look on others for everything”. His assertion came after scores of sons and daughters of the clan invited to the event failed to show up and he and fellow traditional rulers were left to progress with the occasion.

Isoh Etoh served as chairman of the Board of Directors of Pamol Plantations, for over 10 years. In August 2016, Bernard Okalia Bilai was appointed to replace him.

Though the replacement came as a shock to admirers of the Chief, he is said to have dissolved agitations against the decision within his clan. As board chair, the chief earned admiration for always using his official car to transport his peers, traditional rulers whenever out on political, social and cultural engagement.

Often times, Itoh will offer dinner to state dignitaries and other functionaries at his Ekondo Titi palace. The chief had reclined to his normal life within the current social pressures in the North West and South West Regions.

Even as condemnation remains on the rise over Sunday’s incident, there has been no official release, confirming the Ekondo Titi macabre on the Chief. As at press time, reports indicated that, sporadic gun shots had erupted in Ekondo Titi following the incident.