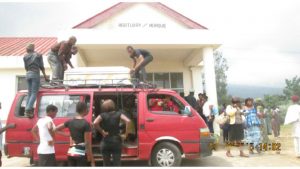 Mortuary attendants at the Buea Regional Hospital Annex are alarmed at the increasing number of corpses as the Anglophone Crisis escalates.

The mortuary attendants were speaking after what they termed “horrible corpses” as the crisis witnessed a high dead toll with many Anglophones been killed by Government forces. Talking to The Post Newspaper, the Mortuary Attendants lamented the fact that the state at which corpses arrived the morgue is always horrible.

Hear them: “Our job is becoming more and more difficult. Not only has the mortuary become small, but the types of corpses that are brought here for preservation are horrible. At times we are forced to go against the laid down norms because certain corpses come here with instructions from above and we are expected to simply obey.

“To make matters worse, at times the military rush in here, dumps corpses without identification and drive off without saying a word. We are the ones expected to attend to the unidentified corpses. Things are really getting out of hands,” The Post reports.

Since Anglophone Crisis took a new turn with President Paul Biya declaring war against Separatist forces, there has been an increase in the lost of human lives and property.

They have been frequent reports of mass murder and setting of villages on fire by government security forces. This has led to internal and external mass exodus in the two English speaking regions of Cameroon.

The crisis that started on October 16, 2016 with a strike by Common Law lawyers escalated, followed by Anglophone teachers and the subsequent declaration of war on Anglophone separatists by President Paul Biya, a lot of killings of both the military and civilians have been recorded in the Southwest and Northwest Regions.

Previous 2018 Presidential Election: CPDM Bans Campaign Rallies In NW After Threats From Gunmen
Next Another Week Of Blood, Tears In NW