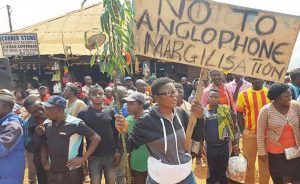 The government of Cameroon has launched fresh crackdown on activists of the Southern Cameroon National Council, SCNC, as the Anglophone crisis continues to get worst in the two English speaking regions of Northwest and Southwest regions.

In January 2017 that the then Minister of Territorial Administration and Decentralisation, Emmanuel Rene Sadi, banned the SCNC and the Cameroon Anglophone Civil Society Consortium, CACSC, the activists have been termed by the regime as secessionists.

This has seen many of them been on the run as their family homes and neighbourhoods have been on a constant check by security operatives. Some family members are tortured at times for them to reveal the whereabouts of the SCNC activists.

Considered by the Government as terrorists, charges against SCNC activists often range from the propagation of false information, secession, insurrection, rebellion, revolution among others.

Those arrested are killed while those that are lucky are tortured, maimed and detained in unknown places.

These have forced some activists to go underground, meanwhile, others arrested are nowhere to be found as family members and friends worry over their disappearance while in detention.

One of such cases is Kim Bronhilda Sih, who joined the SCNC alongside her husband and other female vibrant activists like Lum Mary, Limunga Theresa among others in May 2014. Giving the task to sensitize Anglophones, these female activists have been arrested on many occasions.

Kim Bronhilda was first arrested alongside her husband on December 31, 2016, after government forces discovered she and her husband owned the SCNC membership cards.

In one of her numerous detentions by the government forces, she lost her pregnancy as a result of the ill-treatment she received during her detention under poor conditions and torture.

The young crusader of the Anglophone rights was again arrested alongside close to 50 other activists as they prepare to celebrate the Southern Cameroons Independence Day on October 1, 2018. According to reports, while in the detention camps, most female activists were sexually violated.

Despite these and detention under horrendous conditions, they are starved or at times are lucky to have a single meal in a day.

Going by our source in the ranks of the SCNC, some of these female activists smuggled themselves out of Cameroon through Nigeria with the help of an insider.

All the SCNC activists declared wanted will face a charge if found guilty and might be given a death penalty.