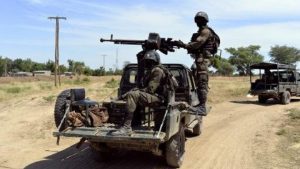 The U.S. military is training Cameroon’s military on first aid techniques and medical evacuation in order to reduce battlefield deaths. Cameroon estimates that one-fourth of all soldiers killed fighting separatists and Boko Haram terrorists could have been saved with better care.

Twenty-nine-year-old soldier Poumje Amidou has been getting treatment for fractures since last October at the military hospital in Yaounde.

Amidou said he barely escaped death when separatist fighters attacked his base, leaving one of his colleagues dead and two others wounded.

He said what he remembers is that he bled profusely and had serious wounds on his left leg, stomach and right arm.

Amidou’s life was saved when a Cameroon military helicopter rushed him to the hospital.

But others were not so lucky.

In recent years, about 117 soldiers have died from wounds that would not have been fatal had they received the correct first aid, according to Cameroon’s military.

That’s about one-fourth of all Cameroonian military deaths in the battles against English-speaking separatists and the Nigerian militant group Boko Haram.

Better care for the wounded

U.S. military advisers are working to prevent future deaths by training soldiers to provide better care for the wounded.

Major Mommearts, who did not give his first name, is one of the U.S. trainers.

He said the course on MEDEVAC – medical evacuation – includes evacuating casualties by air, known as CASEVAC.

“We talked about the different levels of CASEVAC, so you have your own legs, you can move the patient yourself, you have different pack bones that they can use. Make sure they are not bleeding while they are being transported.”

In February, the U.S. announced it was cutting some security assistance to Cameroon following allegations that Cameroon’s military was committing human rights violations.

The U.S. says despite the reduction in military aid, relations between the two countries are good.

The director of Cameroon’s military health, Colonel Abeng Mbozoo, said those ties are shown by the U.S. medical training.

He said the training is an indication that military cooperation between the U.S. and Cameroon is excellent. That is the reason the U.S. military has come to train their Cameroonian peers, said, Mbozoo, to save lives and prevent deaths in different battle grounds.

Thirty Cameroonian military staff received the U.S. training this week and will pass on the knowledge to their colleagues.

Fr Sob’s Killers Are Amongst Us, Bishop Bushu Shocked Mourners