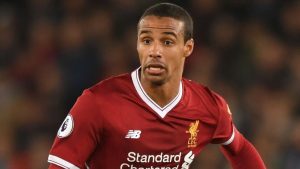 The centre-back has bounced back after an injury-affected season, and believes his side can cap a memorable season by seeing off Spurs in Madrid
Liverpool centre-back Joel Matip is confident his team can finish off a fantastic season by beating Tottenham and winning the Champions League.

The Reds reached the June 1 final in Madrid after coming from three goals down to beat Barcelona in the semi-finals, while Spurs knocked out Dutch dark horses Ajax on away goals.

Jurgen Klopp’s team have had a fantastic season in the Premier League, where they only lost one of their 38 games, finishing with 97 points, just one off eventual title winners Manchester City.

And Matip is now looking for Liverpool to round off a memorable season by going one better than 12 months ago when they were beaten by Real Madrid in the Champions League final in Kiev.

Matip told Liverpool’s official website : “It was a great season and we can finish it. It’s the biggest game during this season and we will do everything for this.

“It will be a completely different game, but we know we can beat them and we are looking forward.”

Liverpool won both Premier League meetings with Spurs this season 2-1, although they were the beneficiaries of a 90th minute Toby Alderweireld own goal when the teams last met at Anfield in March.

Matip started that game, having only appeared as a late substitute in the first meeting at Wembley in September as he endured an injury-hit start to the season, which included having a month on the sidelines after breaking his collarbone.

The defender has been involved in 19 of Liverpool’s last 22 matches, forming a solid centre-back partnership with Virgil van Dijk.

He is upbeat about his current form, saying: “At the beginning of the season I was struggling with injuries and other lads did very well, so there was no reason to change.

“But in the second half I could play and could improve. I feel good.

“You are waiting for this. And then if you can use it, it’s not a bad feeling – it’s not the worst feeling.”

Matip only made 11 appearances for Liverpool before Christmas, and failed to play in any of the Reds’ fixtures in October.

Despite this, the Cameroon international has helped to keep 14 clean sheets in his 30 appearances in all competitions this season.