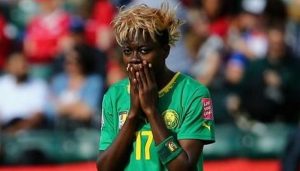 Former African women’s Footballer of the Year Gaelle Enganamouit was named on Friday in Cameroon’s final squad for the women’s World Cup in France despite concerns over her fitness.

The 26-year-old striker, who scored a hat-trick at the last World Cup in Canada, was given a vote of confidence by coach Alain Djeumfa despite only joining up with the squad last week at their training camp in Spain.

She has struggled with injury over the past three years and was told to go on a specialised training programme to get fit for the World cup, which kicks off on June 7.Enganamouit will likely renew her partnership in attack with 35-year-old Madeleine Ngono Mani, who made her international debut 17 years ago.Cameroon also included two Americans — defender Estelle Johnson, 30, who was born in Cameroon but raised in the U.S. where she played professionally, and Houston-born Michaela Abam, 21, who has Cameroonian parents.

“Their integration went well, they feel very comfortable in the group,” Djeumfa told the Cameroon Football Federation’s newsletter.It is the second time the Indomitable Lionesses compete at the World Cup and meet Canada, the Netherlands and New Zealand in Group E.”It’s a tough group but at World Cup level, there are no small countries. We do not come to the World Cup to learn. We come rather to prove,” added Djeumfa.”If you look at the four teams in our group, we may be the underdogs. But I can tell you that we will have a say in the outcome of this group.”Their opening game is against Canada in Montpellier on June 10.