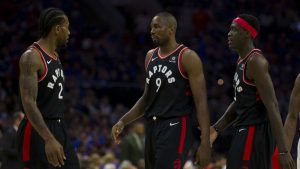 Cameroon’s Siakam was in electric form at the Scotiabank Arena and scored 32 points to give the Raptors a 1-0 lead in the best-of-seven game series.

DR Congo’s Ibaka also played a crucial defensive role after coming off the bench and made some of the key blocks to stop Warriors’ attack.

After celebrating Chelsea’s triumph in the Uefa Europa League on Wednesday, Eto’o turned his attention to the biggest basketball game of the season and was proud of the Africans’ contribution.

“Congratulations to my little brother Pascal Siakam, proudly representing the red-yellow-green as the first Cameroonian to play an NBA final,” Eto’o wrote on Instagram.

“A nod to Mister Serge Ibaka. Good luck, my young brothers, Africa is proud of you.”