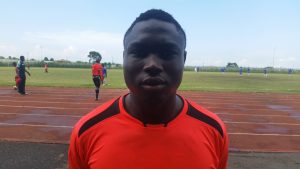 Fabrice Atanga Njie was on target with a brace as CUSA humiliated FUSA of Limbe 6-0 on Sunday at the Molyko Omnisport stadium in the ongoing Southwest Regional League.

The wizkid scored opened the scoring in the early 15 minutes of the game and will later in the second segment of the game scored his second to register his first brace of the season with CUSA,

During the encounter saw the forward playing 90 minutes, Atanga Njie also provided two assists to help his side in the goal rout.

The teenager has been having a wonderful season with CUSA and is one of the promising players in the region since making his debut last year.

Speaking to reporters after the game, Njie said he was happy and also promised to work harder to provide many such performances.

” It was one of my best moments in the pitch (Southwest Regional League). I feel more confident after my first brace in the championship and will work harder to help my team in the remaining games,” Njie said.

CUSA is second in their pool with EEMSA currently occupying the first position.