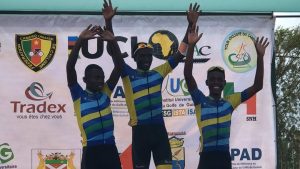 The young international cyclist crossed the finish line in 2hours 3minutes and 1second after ten turns at the Logbessu neigbourhood.

The close circuit lap covered a total distance of 82 km, the shortest in the eighth lap race.

On his heels was Cameroonian Herve Raoul Mba who was just  few seconds away from the Rwandan.

Herve Raoul Mba could have been the winner of the lap if not of his early jubilation which made him raise his hand, an advantage the Rwandan exploited and paddled over the finish line

The distinctions on day-6

He won for the third successive time. Stephan Bakker of Dutch origin was crown the cyclist with the highest points classification. He bears the green jersey since day-1.

Bdadou Youssef of Morocco was awarded the dotted a status conferred on the best climber of the lap. The award of medal ceremony was attended by the Littoral governor, Ivaha Diboua and his close aids