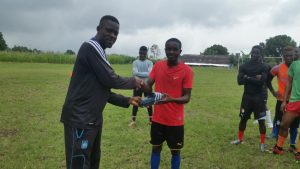 The management of Southwest Regional League side Buea United FC in its quest to bring out the best in the squad, rewarded outstanding players in their last encounter against local side continental FA.

During this encounter, the Mountain Boys as they are fondly called, thrashed Continental FA  3-0 to get their first win in the season and also the first for newly appointed coach Agbor Emmanuel aka Alabas.

Speaking during the handing ceremony, the President of Buea United Valery Kadji said the initiative was to boost players’ performances in games and also to help them in their careers.

The award was handed by the Coach to Jimmy Njokam and Zebede Mukete Barngorbi who emmerged first and second respectively.

To the Team Manager Ngu Gaston, the club will in time create other awards to help boost the careers of the players as they look forward to be a formidable force and a nursery of talents in football.

Speaking after the award, Zebede Mukete Barngorbi  thanked the management and promised to work harder.

The first outstanding player received a pair of football boots while the runner up was given football slippers.