Samuel Eto’o not ready to hang up boots 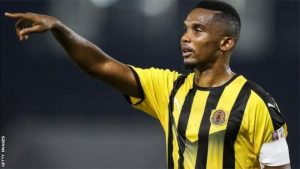 Legendary Cameroon striker Samuel Eto’o has hinted that he will only retire after one more season in Qatar.

The former Barcelona goal poacher has had a glittering 20-year career as a professional footballer and is still going strong.

Eto’o plays for Qatar SC in the premier division of the Middle East nation after joining from Konyaspor in Turkey last year.

“At my age I prefer to stay in Qatar. I am grateful that they have given me an opportunity to play while I am also planning my education project,” Eto’o said. “I think I will go another year and then see after that.”

The 37-year-old is well known for his philanthropic work on the continent and has helped build schools and hospitals in his home country of Cameroon. The education project he plans to spearhead after his retirement forms part of this.

Eto’o is in SA as an ambassador for the Castle five-a-side football competition starting in May.

Late last year, Cameroon was stripped of its rights to host the 2019 Africa Cup of Nations, which have been awarded to Egypt. The three-time Uefa Champions League winner has backed his country to host a successful tournament in future.

“It will happen in two years’ time so I think it gives time to the government to fix everything. I hope it’s going to be one of the most wonderful tournaments that we have seen,” he said.

Images of Eto’o having lunch with a number of local footballers including Bernard Parker, Lebo Manyama, Tendai Ndoro and Thuso Phala flooded social media during the week.

The former Chelsea and Inter Milan star said: “We spoke a lot about football and they asked me about my career. They told me about SA football and I know that the level is very high here as compared to other African countries.”