Breaking News
Home / SPORTS / Women’s World Cup 2019: What to look out for on day six 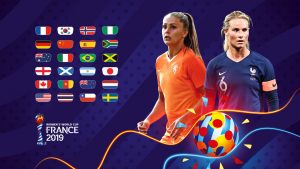 Defending champions USA got their World Cup campaign off to the perfect start with a crushing 13-0 win over Thailand in Reims on Tuesday.

The USA’s victory completed the opening round of matches at this summer’s showpiece event – so what can we expect from day six?

Olympic champions Germany then face Spain at the top of Group B in Valenciennes with both sides having won their opening matches (17:00 BST).

Finally, hosts France will look to take control of Group A against their closest rivals Norway in Nice (20:00 BST).

BBC Sport will have live coverage of every World Cup match across TV, radio, the Red Button and online from the group stages all the way through to the final.

BBC Four will show France v Norway live from 19:45 BST, while coverage of Nigeria v South Korea and Germany v Spain will be available on the Red Button.

There will also be live text coverage of all three matches on the BBC Sport website.

Chelsea’s number 10 Ji So-yun is South Korea’s all-time top goalscorer with 54 goals from more than 100 caps, after becoming her country’s youngest scorer at 15 years and 282 days.

Ji is hugely popular at Chelsea, having won the Players’ Player and PFA Player of the Year in the 2014-15 season.

She was largely ineffective in her side’s heavy defeat to hosts France in a defensive display, but she could be given more service and time against Nigeria.

Jennifer Hermoso enhanced her reputation as one of Europe’s most feared strikers with two goals in Spain’s opening game win over South Africa.

The 29-year-old struck two penalties as the Spanish came from behind to avoid a surprise defeat to debutantes.

Her brace followed seven goals and nine assists in the qualifying campaign, after winning the Liga Femenina Golden Boot with 24 goals in Atletico Madrid’s title-winning season.

In a thoroughly dominant performance, the centre-back was unchallenged at the back as well as providing her side a genuine threat from set-pieces.

At 6ft 1in, Renard towers above most of her opponents and if the delivery is right, she is likely to add to her impressive tally of two goals from one game.

What are Wednesday’s key stats?

What are the big stories of the day?

Germany midfielder Dzsenifer Marozsan could miss the rest of the World Cup after breaking her toe in the opening game victory over China.

Lyon’s Marozsan, 27, played the full 90 minutes of the 1-0 win despite the injury but will miss Germany’s two remaining group games.

“We’ll try to get her back… but I cannot give a precise prognosis,” head coach Martina Voss-Tecklenburg said.

“You cannot replace her because she has special qualities and abilities.”

Marozsan – who won a fourth straight Champions League title with Lyon in May – was third in the inaugural vote for the women’s Ballon d’Or, a remarkable achievement considering she was out for three months with a lung embolism from July 2018.

It’s set to be a battle of the heavyweights in Group A as France face Norway in Nice.

France are top of the group after a thumping 4-0 win over South Korea in the opening game, with Norway closely behind on goal difference following their 3-0 triumph over Nigeria.

Norway won the only previous World Cup meeting between the two countries, a 2-0 victory in the group stage in Philadelphia in 2003, but France are set to be backed by a huge crowd in Nice after more than 45,000 fans watched them cruise past South Korea in Paris.