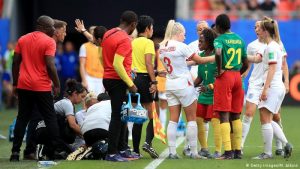 England midfielder Jill Scott has credited the team’s psychologists for helping them ignore the chaos that marred their 3-0 round of 16 win over Cameroon on Sunday.

Scott helped England set up their quarter-final tie against Norway in a match that was nearly halted twice. Cameroon first seemingly refused to play after VAR reviews allowed Ellen White’s opening goal, protesting further when the technology disallowed an Ajara Nchout finish that would have made it 2-1. It is now thought the referee wrongly turned key decisions in Cameroon’s favour because to prevent further disruptions.

The England captain Steph Houghton was also the victim of a late, scraped challenge from Alexandra Takounda and Scott admitted England will “just have to wait and see” if her Manchester City team-mate will be fit to feature against Norway.

Scott said: “She did take a heavy knock on an ankle. We haven’t been out as a whole squad to train yet, so we’ll just have to wait and see. She’ll want to play in every single game, so I think it’s just going to be a case of seeing how her ankle reacts to the injury.”

The England head coach Phil Neville immediately praised his side’s composure “under circumstances I’ve never seen on a football pitch before”, with Scott adding that the controversy was a stern test for a tournament that is “going to get even more emotional”.

“We do a lot of work away from the pitch about how we conserve our emotion at certain times in games, and how to always think logically,” she said. “It’s easy sometimes sitting in a meeting and saying, ‘If this happens, I won’t react.’ Sometimes, there’s going to be a natural reaction.

“We’ve had some fantastic psychologists over the years. Under Mark Sampson, we almost did as much as we did on the pitch, then Gemma [psychologist with Neville] came in and has carried on that work as well.

“We’ll sit round and we’ll go through individually: if you were a Jill, who was highly emotional, how would that look? We actually did it before the Argentina game and I did say it takes a lot for me to get into my red [zone].

“Just because you all do the same job, it doesn’t mean that you’re all the same person. Those meetings are very good because I can look at maybe Keira [Walsh, Scott’s midfield partner] and think, if she’s having that emotional moment, I need to do this and it will help her.

“In those moments, you realise that without those meetings, it may have been a completely different scenario. People always say the experienced players should be able to handle it, but I’ve never been involved in a game like that in over 140 times playing for England. It’s a new experience for everyone.”

Neville did not discuss the Cameroon game at length with his players beyond praising their reactions, so keen were both parties to move on. Although Fifa briefed all teams on video technology ahead of the tournament, its use has dogged the World Cup and those teams who do not receive great backing from their federations, such as Cameroon, have naturally found adapting harder.

“We’re getting the correct decisions, which is the main thing,” Scott said. “We all want fairness in football. You don’t want to get knocked out of a competition and always sit there at home for the next however many days thinking, ah – if only they could have looked back and looked at the decision.

“I can only speak from an individual point of view, but I do feel it does take away a little bit of emotion. When the ball goes in, you’re constantly looking to see if there’s going to be a check. I think that’s only normal because of the way that the tournament’s gone. But is it a bad thing? I don’t know.

“At times [on Sunday] I felt like, personally, I had no emotion towards anything. The ball went in at one point, I celebrated and then it got taken off us. I felt like I couldn’t get high again when they told us.”