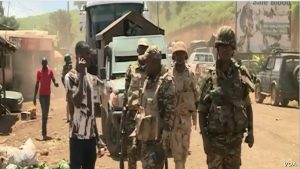 Humanitarian aid workers in Cameroon say they are scared after several consignments of aid meant for people in the country’s troubled English-speaking regions were attacked and burned by suspected separatists.

The rebels are suspicious of the aid convoys’ military escorts and say they will never accept any assistance brought in by the military. The government of Cameroon insists the military is only escorting the convoys to protect aid workers.

However, clashes between the mostly French-speaking government forces and armed separatists have occurred regularly since 2017, when a secessionist movement turned violent. The government cracked down on protests by English-speaking educators and attorneys in the northwest and southwest, where residents have complained about receiving second-class treatment from Cameroon’s French-speaking majority.

The United Nations says at least 1,800 people have been killed and more than half a million displaced in the two years since fighting began.

In a social media video, one of at least seven such videos that have circulated online in the past week, fighters armed with guns and machetes can be seen setting fire to shipments of food, bedding and medicine. Cameroonian rebels claimed responsibility for the attacks.

In one video, the attackers say they will never allow what they call “poisoned” humanitarian aid from Cameroon’s President Paul Biya.

Christian Eselekwe Tanyi, who is with the Martin Luther Jr. King Memorial Foundation-Cameroon, one of the aid groups whose shipments were destroyed, said, “More and more, we see humanitarian actors being attacked or being threatened, or misrepresented as either working against the state or working with the state. They work to relieve the suffering of the population. They do not side with any party to the conflict. They respect at all times the principles of neutrality and impartiality.”

Nfor Peter Shey of Cameroon Rights Watch said the attacks on aid workers increased after April 14, when the government sent 55 truckloads of assistance with a military escort and troops to distribute it.

“When you look at the atrocities that are being meted out to the population in these areas, the military is the prime suspect,” Shey said. “The burning of the houses, they say, is the handiwork of the military. Many people in these areas believe the government is not doing enough to call for dialogue, which people think can be a headway to solving this problem.”

“The president of the republic instructed us to intensify the distribution of humanitarian aid, to put in place mechanisms so that the locally affected populations can put in place strategies to be self-reliant,” Nji said.

But it’s not only Cameroon’s military that is being attacked. Last week, the government said rebels killed four policemen and wounded six others who were transporting aid to the southwestern town of Eyumojock.

Aid workers could not confirm the number of recent attacks or quantity of items destroyed but said the losses were huge and would only bring more suffering to the English-speaking population.

Teacher Valentine Muluh in Yaounde said his 76-year old father in the northwest town of Kom relies on medical aid to treat his diabetes. The recent attacks on aid convoys have prevented his father from getting treatment, he said.

“We are actually very worried because his diabetes is at an acute stage,” Muluh said. “We have not been able to get his treatment for two weeks, and the nurses say his situation is getting very preoccupying.”

Cameroon authorities have accused international aid groups of exaggerating the conflict in the English-speaking regions. The government said there were 152,000 internally displaced persons in the regions and that two-thirds were receiving aid.