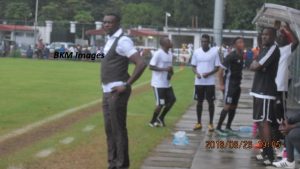 Victoria United are reportedly in talks with coach Joseph Mbock Maput over a possible return to the club.

Credible sources at the club have informed Cameroonnewsline.com that talks between both parties are now at advanced stage and the charismatic titling winning manager is open to a return to the club where he began cutting his managerial teeth.

Joseph Mbock Maput opted to take a sabbatical last term following Opopo slow start to the 2018/2019 southwest regional campaign it appears the club powerbrokers have convinced the charismatic gaffer to end his self imposed exile from the sport he so much love.

There were doubts about Victoria United participation in the forthcoming Southwest Regional Championship, those doubts have now been put to bed as the club will begin preseason training on Monday.

Reports of coaching Mbock Maput possible return to the club has been welcomed by the club adoring faithful who consider him as a cult hero.