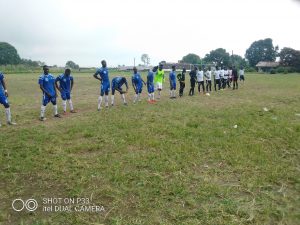 The first day of the maiden AE Sports Management Buea Preseason Tournament kickoff yesterday with a lot of surprises recorded as favourites struggle to edge their opponents.

In the first encounter, it was newly created Istanbul Football Academy of Buea that humbled Mount Cameroon FC 3-0. Istanbul FA is the bookies favourite to lift the trophy, but the competitions look fierce in this tournament.

The second encounter saw Buea United FC of Valery Kadji given a tough time by the stubborn University Of Buea FC. Both sides were only separated by a second segment penalty converted by Buea United’s Renzo.

Meanwhile, it was Fako League side Babungo SA that edged Southwest Regional League side Dynamic FC to carry the day 1-0.

The first day saw a total of five goals scored by five different players from three clubs while red was shown to a player of Mount Cameroon FC.

After Matchday 1, Istanbul Football Academy of Buea now leads Pool A while in Pool B, Buea United FC and Babungo SA are in the first position.