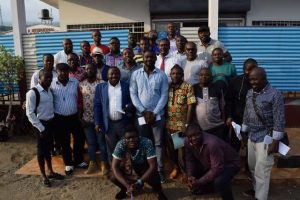 The Southwest Chapter of the Cameroon Association of Sports Journalists, CASJ-SW, recently elected a new Executive for the Region.

The elections led to the emergence of Clextus Abong of Eden Newspaper as President after he defeated incumbent President, David Mbua Evelle Kool.

The Post’s Basil K Mbuye was voted Vice President by acclamation just like Lake Side Radio’s Divine Nyambot who maintained his Secretary General post. Aka Ntui Ayamba of CAM1 TV was elected Treasurer of the association.

The new Executive Bureau, which will steer the affairs of the Southwest Region for the next four years was immediately sworn in after the elections by the representatives of the national bureau that oversaw the elections.

The new executive was charged to work hard and also to see that sport reporting in the Southwest Region is given a special touch.

In his speech, Clextus Abong promised to do his best to see that sports journalists in the Southwest Region in particular move to another level.

Hear him: “I will ensure that all competitions coming to the Region will have sports journalists at the forefront. We will also pay visits to institutions in the Region that are sports incline and also the Southwest FECAFOOT Bureau to expose the project that we are going to earmark on. Also, we will organise indoor training and seminars for sports journalists and make way for members to travel out of the Region or country for exposure.”