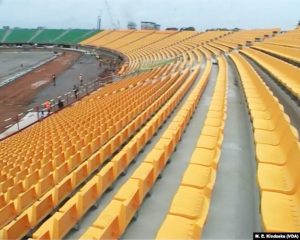 It is no news that football in Cameroon is played in empty stadiums, despite the acquisition of some mini up-to-standard infrastructure and also the hosting of upcoming international events.

With many Cameroonians still having that nostalgic feeling of the yesteryears, when Canon of Yaounde clashed against Tonnerre, when Union took on Caiman, Elect Sport against Victoria United, PWD Bamenda versus Kumbo Strikers, among others, these encounters used to have supporters scrambling for seats.

However, the situation is not the same today as lovers of football have given so much priority to European football rather than local football. This has put to question the reason why Cameroonians are not supporting or promoting their own football.

Several reasons have been advanced by some football lovers and pundits on what has gone wrong that the crowd stadiums in the past used to have is no longer the same.

For a footballing nation like Cameroon, the empty stadiums during championships is a lamentable situation which something has to be done fast to salvage.

Here are some suggested few ways to get punters through the turnstiles:

Encrypting these channels will leave them with no other choice than to come to the stadia. This is the system practised by some European countries, although, in this case, they don’t broadcast their championships in the country on match day, so to force football lovers to go to the stadia.

Also, improvement in the organisation of the championships will help attract fans to the stadiums. Well organised, transparent fixtures and respected championships, will attract support to the stadiums. Should a league be well organised, it will help attract sponsors who will come in with money which will also increase the level of football played since players will be well paid.

Quizzes should be organised on radio programmes about local football, while players are also profiled on local channels and other media outlets. The federation should work hand-in-glove with sports journalists to bring back supporters to the stadia.

When a Parisian rugby team moved from its 12,000-capacity ground to the newly built 74,000-seater national stadium, it had to do a lot of work to boost support. Dr. Guillaume Bodet says Stade Francais Paris rugby union club made the leap by laying on plenty of extras for fans.

“They might have can-can dancers before the game, a mini-concert at half-time and then end it all with a huge fireworks show,” says the lecturer in sports marketing at Loughborough University.

“At one event, Darth Vader came into the stadium backed by the Star Wars music to present the match ball to the players. It changed the image of rugby, making it more trendy and introduced new fans like younger people and families,” BBC reports.

The power of celebrity will be another way of seeing that fans occupy empty stadiums. Having the faces of some top celebrities or legendary players to watch some games in some localities will attract a high match attendance.

For example, imagine Samuel Eto’o attending a football championship match in Limbe, or Standley Enow performing before a football game in Ebolowa.

These and more will influence attendance in some games and, why not, all games.

First published on The Post Newspaper edition of Friday,December 20,2019