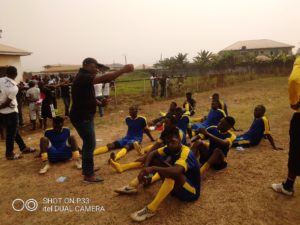 Victoria United FC aka OPOPO on Thursday, January 9 silence their host Tiko United FC aka Samba Boys in a friendly that took place at the Tiko Town Green Stadium.

The encounter that took place as part of preparations for the upcoming Southwest Regional Football League pulled a total of close to 300 Tiko United FC supporters as they came out to support their club.

Both sides will go on recess without any breaking the deadlock despite the high level of hostilities witnessed in this half of the game.

When play will resume in the second half, Tiko United showing a drop in steam, it was the visiting side OPOPO that got the curtain-raiser at the 52nd minute.  Despite a number of changes from Tiko United to get an equalizer, it was the boys of Coach Mbock Maput that increased tally from a penalty spot at the 90th minute to make it 2-0.

The game will finally end with the visiting side beating their host 2-0.

Speaking after the game, Coach Mbock Maput of Victoria United congratulated Tiko United for putting on a tough performance. “It was a good game with both clubs playing well. Tiko United are a very good side. I was impressed because I know they have not trained for long but they put on a very good fight. The players showed so much determination,” coach Mbock said.

On his part, Coach Mbathou Maurice praised his players for the wonderful performance despite their 2-0 bashing.  “We came into this game after training just for four days. The first half was good and the second wasn’t that good. We still have so much work to do but I am optimistic that we shall be there,” Tiko United Coach said.

It was the second friendly for “Tiko United for Jesus” after they beat Little Foot FC 2-0 in their first friendly three days ago.

Tiko United will face Ajax in their first game in Pool G while Victoria United will start the season with a game against NQSA in Pool D on Sunday, January 12.