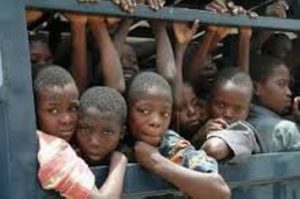 YAOUNDE, Jan. 20 Xinhua  | Cameroon National Gendarmerie said Monday it has bust a child trafficking ring that had been selling children from the country’s South region to buyers in neighbouring Equatorial Guinea.

Last Friday, Cameroon gendarmes on a regular border patrol spotted a suspicious bus that was bound for Equatorial Guinea. The gendarmes then caught three suspects, including a couple and the kidnapper, and rescued two abducted children, who are respectively 3 and 10 years old.

“A suspicious couple was taking them to Malabo (Equatorial Guinea’s capital). They purchased the children from the person who kidnapped them in Ebolowa (chief-town of Cameroon’s South region),” the gendarmerie said in a statement.

The two children were kidnapped last Thursday by a middle-aged woman, who confessed during interrogation that the couple promised to pay her 1,800,000 CFA francs (about 3,000 U.S. dollars) for the two children.

The rescued infants have reunited with the families and are in good health, according to security officials, who added that formal inquiries had been launched to “completely dismantle” any network of child trafficking in the border region. Enditem