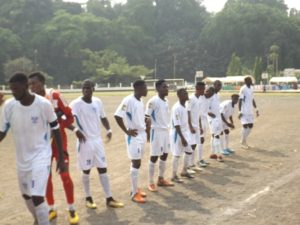 Newly promoted HO Academy of Buea is the giant-killers in the Southwest Cup of Cameroon playoffs after knocking out a couple of big names in the region’s football.

On Thursday, January 30, the club in its last game knock out another big name Tiko United after beating them 1-0 at the Limbe Community Field.

The club has earlier on humiliated Dynamic FC of Buea 4-0 and will, later on, send Victoria United FC from the Cup in a 3-2 thriller that took place at the Tiko Town Green Stadium.

The boys of Coach Serge Bokagne are sending warning signals to rivals this season as they continue to gun down big names in the region’s football. The club is part of the last four that will see three clubs to represent the region in the Round of 32.

Still, to play a single game in the Regional League since gaining promotion, the club is gradually becoming a household name in the region.