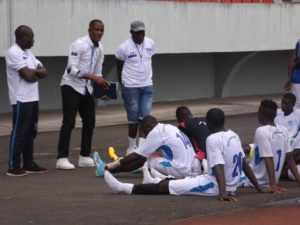 HO Academy FC Coach Serge Bokagne said his side’s defeat to Buea United FC in their season opener was a well-deserved one for his opponents.

Coach Bokagne’s side was beaten 2-1 by Buea United at the Molyko Omnisport Stadium as they fail to get back into winning ways after their defeat against Options SA in the Cup of Cameroon.

“We didn’t play well but it’s because our opponent (Buea United FC) was very good. I saw a very good team of Buea United and I think they merit their victory. They were realistic and made use of their chances,” Coach Bokagne averred.

He also said the positive lesson in the defeat is that it will help his side wake up from sleeping in their Cup of Cameroon laurels after their qualification.

Hear him: “I hope this defeat will help us work harder because the victories during the Cup of Cameroon playoffs seem to have made my guys complacent. We are going to learn from today’s defeat and I assure you that our next game will be a better one.”