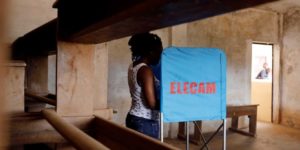 The Municipal and Legislative elections of on Sunday, February 9, across the nation witnessed some irregularities in some polling centres, through which the ruling Cameroon Peoples Democratic Movement, CPDM, reportedly rigged itself to victory.

Despite the low turnout in some polling stations, reports of irregularities were glaring.

When this reporter visited the polling centres at the Cameroon Opportunity and Industrialisation Centre, OIC, Buea, a member of the opposition Social Democratic Front, SDF, decried the fact that votes were being bought. The SDF representative said he had received a call from someone asking him to come to OIC to stop the irregularities.

An SDF polling agent recounted how, when voting started at OIC around 8.45am, everything was going on well, until a former CPDM Parliamentarian showed up. To him, it was after the former CPDM MP left that he started noticing suspicious movements.

Hear him: “A CPDM agent who was in the same polling station with me proposed the sum of FCFA 10,000 to me so that I should turn a blind eye on their electoral malpractices. I told him I was ready, just to know what method he was about to use. Confident that I was with him, he told me that at the last hour of voting, they will put in ballot papers which they have put in envelopes inside the ballot boxes. I had to immediately inform a member of the SDF party for him to be alert and also to caution other SDF polling agents. When I was called outside, I indicated to the CPDM polling agent that our deal was exposed and I was cautioned. Knowing that our deal could not continue, he started approaching ELECAM chairpersons.”

However, some observers hold that the SDF inability to see that they have more than two agents per polling station facilitated the CPDM rigging machinery.