Maurice Kamto on BBC: “We wanted an inclusive Cameroon” 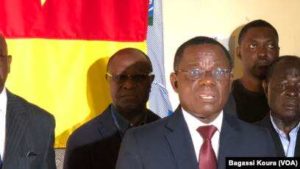 BBC – The leader of the opposition MRC party that boycotted Cameroon’s parliamentary and local elections has told the BBC that the Anglophone crisis was “a major reason” for the decision.

Clashes and gunfire were reported during Sunday’s polls in several Anglophone towns, plus separatists had ordered a lockdown earlier that week.

He told BBC Focus on Africa radio that had he won, he would have brought Cameroonians together with “an inclusive dialogue, including representatives of the secessionists, those who how have been sentenced to life [in prison] recently, [and] those in the diaspora”.

Though it did not include Anglophone separatists, a national dialogue was held last September that resulted in the release of political prisoners including Mr Kamto as well as proposals to give the Anglophone regions a special status.

Yet it seems to have done little to quell the violence in the English-speaking North-West and South-West regions that has killed thousands and left many schools and services shut.

Speaking to the BBC, Mr Kamto defended his decision not to visit that part of the country in recent times, citing “security reasons”.

“Do you have any example[s] in which political leaders or the government itself has been able to go in the field and count the number of the deaths?,” he said, adding that journalists, NGOs and the army were being relied upon to document the scale of the crisis.

Addressing the charge made by some that he has been less outspoken since his release from prison, Mr Kamto said he remained “very vocal” and denied striking a deal of any kind with President Paul Biya’s administration.