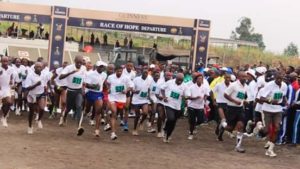 The Local Organising Committee of the 2020 Mount Cameroon Race of Hope has been tasked by the Governor of the Southwest Region, Bernard Okalia Bilia, to make the race a better one than that of last year.

The Governor gave the task after the appointment of the members of some 14 committees on Tuesday, February 4, that will oversee the activities of the February 22 Mount Cameroon Race of Hope. After appointing the members, Okalia Bilia immediately urged them to get to work because there was no time, considering the busy calendar of the month.

To see that mistakes of last year are not repeated, members were asked to make observations. Those of the Communication committee raised issues like the accreditation of journalists to cover the race. Here, issues like the poor method of accreditation were a concern. It was pointed out that the system in which badges are given out saw charlatans having badges, while journalists were deprived of them. Another issue was the marginalisation of the local press, among others.

At the level of security, there was a complaint of drones used by the television houses to film the race. Security experts said the drones could be used by Separatists to launch an attack during the race. To solve this, the Governor said he will order for the shooting of any drone that has not been registered.

Meanwhile, it was proposed that former champions of the race should be given a place among the VIPs during the race.

Speaking after the appointment of the members of the Local Organising Committee, Southwest President of the Regional League of Athletics, Andrew Eteki Njoh, was optimistic that this year’s race will have foreigners, unlike in the last two years.

As to who is to win the race this year, Andrew Eteki said: “We are expecting that somebody from Buea this time might be able to win the race. It’s been quite a long time since we had a champion and we are all putting hands on deck to see the son of the legendary Sarah Etongue win this race”, Eteki said.

The 24th edition of the race has been slated for Saturday, February 22