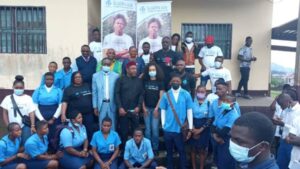 Dynamo Moscow Wideman Clinton Njie has spoken about his desire to give back the community following his donation of FCFA 13.5 million to eleven government and confessional secondary and primary schools in Buea sub division.

The Clinton Njie Care foundation goal is to work with valued partners to inspire young people from underprivileged backgrounds to develop their potential.

” Each child is full of God’s given potential. Sometimes what they need is that little push to enable them keep dreaming for a brighter future. Seeing joy on the faces of others brings me great happiness” Njie stated.

The support to schools and school going children which took place on September 7-8 2021 saw the distribution of didactic materials and school maintenance.

In concrete terms, two of the eleven beneficiary primary schools had their class rooms completely renovated and painted. While the other schools benefited donations like dozens of computers, benches, over 6000 exercise books, pens and anti COVID-19 hand washing buckets.

At each stop, the Secretary General of the Foundation, Adraina Romeo who’s the wife of the star striker was handed a list of problems currently plaguing each institution of learning.

She lauded the teachers for making maximum positive efforts for the community and revealed the foundation intends to extend its tentacles to more educational establishments in the nearest future.

” Thanks everyone; for the team and schools. It’s just the beginning and we say thank you” she said.

On his part the Public Relations Officer of the Foundation, Rene Katche underlined that Njie was simply going back to his roots as the beneficiaries had impacted his life in one way or the other on the past.

” He’s focus on result, for him it’s all about what adds value to their lives” he explained.

The Board Chair of the Foundation, Senator Mbella Muki Charles, Adriana Romeo and other officials made the two-day donation exercise indelible.

Previous Back To School: Destiny Restoration Puts Smiles On Faces Of Less Privileged
Next Back To School: The Municipality Should Emulate Gardens Boys And Girls Forum-Mayor Eposi Mbwaye Florence