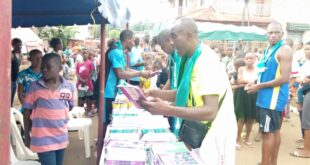 A group sexually assaulted, beat, and humiliated an intersex person in Cameroon’s capital of Yaoundé on November 15.

According to a report by the international human rights group Human Rights Watch, the perpetrators filmed their assault that took place over the course of two hours. The videos have since been shared on social media. (Editor’s note: Though blurred, the video may still be disturbing to some.)

The victim suffered bruises all over her body, HRW reports. Her doctor said that she would need to be monitored for a couple of weeks because of the seriousness of her injuries.

French TV station TV5Monde reports she met the attacks at a bar. After rejecting them, they began attacking her.

A day after the assault, the Cameroonian Foundation for AIDS (CAMFAIDS) filed a criminal complaint with the police. The group is also helping the victim with both medical and psychological care.

On Twitter, Nkwain Hamlet, executive director of the Cameroonian human rights group Working for Our Wellbeing, said, “The recent attack on an #Intersex person in the city of Yaounde is something to be strongly condemned. No one is to face that kind of violent treatment.”

Authorities held a man for 48 hours in connection to the brutal attack, but he was released.

CAMFAIDS told HRW that the victim had been severely traumatized by the event and had attempted suicide last week.

“We found her unconscious in the bathroom beside a bottle of bleach. We called the doctor. She is under observation,” a CAMFAID activist told HRW.

Police haven’t responded to the attack.

“Their silence over this high-profile incident of senseless violence against an LGBTI victim risks sending a message of tolerance for such abuse and highlights the government’s failure to protect LGBTI Cameroonians,” HRW said in its report.

This isn’t the only mob attack recently. In August, a group assaulted two trans women in the city of Douala. This was shortly after the women were released from prison over being charged for a “homosexuality” offense. 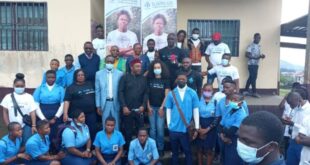