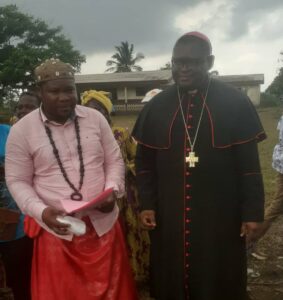 HRH Edward Maole Motande has donated a plot of land, 70 bags cement and 40 tons of sand to build a new Catholic church in Mukunda Village, Cameroon, in response to a request from Christians of St Pius Mission Station, in their quest to end their 80-year wait for a permanent church building in Mukunda village.

The revelation was made on Wednesday by the chief of the Village during a Pastoral Visit to the Mission Station by the Bishop of the Diocese of Buea, Michael Bibi.

Welcoming His Lordship, the chairperson of the Mission Station, Njie John said the absence of a permanent house of worship has majorly led to a decline in attendance and a rising unchurched population.

He further explained that since the church project was launched in 2019, funds have been collected but not enough to erect a house of worship. A visible assistance in the near future he pleaded would Certainly turn dream into reality.

Also speaking at the event, the donor, Chief Edward Motande emphasized that the donation is a visible reminder of his subjects desire to have permanent catholic church building in Mukunda Village.

On his part, Bishop Michael Bibi expressed gratitude on behalf of the Diocese to the chief. He promised to send an architect to the site to speed up the construction of a befitting church house which he hoped would be concluded in two years.