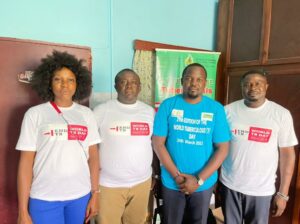 The Inmates of Buea Central Prison with Kenko Foundation and the Regional TB Control Programme Coordinator of Tuberculosis for the South West Region on Thursday, March 24, 2022 celebrated the World Tuberculosis Day under the theme “Invest in TB to save lives”.

The day was marked by a health awareness campaign led by Kenko Foundation in collaboration with the Ministry of Public Health, a network of ex-inmates and Stop TB Partnership.

Speaking at the event the Coordinator of Kenko Foundation, Ray C. Nji said the outreach was necessary to educate the inmates about the impact of the disease to ensure that they know the symptoms which is a barrier to screening and treatment in Prisons.

He said the more inmates know about TB symptoms, the more likely they are to get screened and treated thereby preventing the spread of the disease.

He called on more awareness to ensure cases are detected and treated in a timely manner to achieve TB free prisons.

Solange Bah ,a community health worker from the Ministry of Public Health told the inmates that TB is spread from person to person through the air when people infected with TB cough, sneeze or spit and others inhale the contaminated air.

Speaking during the ceremony, the Regional Coordinator of Tuberculosis, Southwest, Dr Paul Meoto said the day is meant to raise public awareness about the heath, social and economic consequences of TB and to step up efforts to end the global epidemic.

A former inmate and TB survivor, James Enongene, shared his lived experience with TB in the Buea Central Prison shared his experience with the disease and encouraged inmates to get tested and take complete treatment to prevent the symptoms from returning.