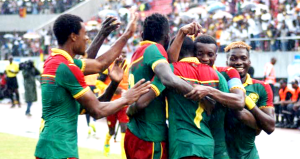 Talks are rife in the nation’s political capital Yaounde that Cameroon will finally host the 2019 African Cup of Nations, AFCON.

This new found optimism comes on the heels of the recent resolutions arrived at during the Confederation of African Football’s, CAF, Executive Committee meeting in Rabat, Morocco.

Shortly after the publication of the resolutions, sports pundits in Yaounde raised diverse views that the decisions taken by CAF executives will have severe consequences on Cameroon that is expected to host the competition in less than 18 months.

Even though, the Minister of Sports and Physical Education, Pierre Ismael Bidoung Mpkatt, had earlier dismissed rumours that the 2019 AFCON hosting rights were going to be withdrawn from Cameroon, analysts are still casting doubts on whether Cameroon will host the competition or not.

According to sport analysts, the decision to increase the number of teams from 16 to 24 beginning with the 2019 edition is a step towards telling Cameroon that they cannot host the competition.

“This is unbelievable that CAF will be increasing the number of teams that will take part in the 2019 AFCON.

I think they should be thinking of the 2021edition which is still far. I see this increment as a step or a way to finally take the hosting rights away from Cameroon,” stated a sport analyst.

Going by the experts “the tournament which will henceforth be holding in June and July is a good move, but at a time when Cameroon is not having enough stadiums to host this competition is a problem.

Cameroon will need to add two more stadiums to make six, but the country is engulfed more in political promises with nothing serious in action.”

Another analyst who spoke to The Post pointed out that if Cameroon does not step up its preparations towards organising the competition, CAF will have enough grounds to withdraw the competition from Cameroon.

“An AFCON with 24-team also requires hotels, training grounds, good transport and network, which Cameroon is not ready to add within this short period of time. In fact, a move to 24 teams will definitely prompt CAF to rethink the new roadmap concerning the organisation of the 2019 AFCON.”

“Cameroon should sue CAF for changing the rules while the competition is ongoing. That is breach of the rules of the game. Anywhere, if the worst comes to the worse, the 2019 AFCON should be co-hosted,” another sports pundit suggested.

Meanwhile, speaking to the press shortly after the meeting, Tombi A Roko Sidiki, President of the Cameroon Football Federation, FECAFOOT, said, “to me, the 2019 AFCON is underway and the playoffs of the competition have started. We are in a world of law and we are not going to change the rules of the game along the way.”

Officials of CAF also said, the move from 16 to 24 teams is falling within a more global logic of visible enlargement with the Euro and the World Cup. Without delay, CAF Inspectors will be in Cameroon in early September to inspect the level of work.

Besides that the competition will continue to be stage every two years, especially in odd years and exclusively on the African continent and with African national selections.

In addition, the Committee recognised the urgent need to improve relations between CAF, its member associations and the African Union.

Also, the committee endorsed the principle of creating a framework of cooperation with legendary African footballers.