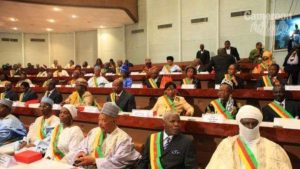 Against popular expectations, President Biya billed Cameroon’s 2018 senatorial elections for Sunday, March 25. Biya made the announcement in a Presidential decree that was broadcast on State radio, CRTV.

As campaigns hit up across the nation ahead of the elections, many Cameroonians have been wondering if the upper house is still worth the dime, given the negative fallouts of the pioneer senators.

Cameroon’s Upper House of Parliament first came to fruition on Tuesday, May 14, 2013, seventeen years after the Tripartite Conference in Yaoundé proposed the institutionalisation of the body in Cameroon’s Constitution.

Going by their mandate, the Senators were among other things expected to probe corrupt government officials, contribute their own quota in the enactment of laws that would have a positive bearing on citizens.

However, after almost six years power, the merits or otherwise of the Senators leave much to be desired as a cross-section of Cameroonians contend that the Senate, and its aged tenants, could be only worth the ballot papers with which they were voted. Many who prefer anonymity, told Journal du Cameroun.com that the Senators were not only a new rubber stamp created to endorse ready-made laws, but they equally proved that they were a convenient arm of the ruling CPDM party, as more than 80 percent of the Senators are members of the old guard of the CPDM party.

“All of those people have had their go at politics more than most get. Some of the Senators are believed to have hit intellectual menopause, making it difficult, if not impossible for them to think shrewdly in order to deliver the socio-political and economic goods that Cameroonians, especially the youths, continue to yearn for, such as political franchise, job opportunities, healthcare, housing, roads, good education, and why not, good governance as a whole”.
“It is eminently possible that any of these Senators would behave in the same manner Parliament has been conducting business; handclapping bills into laws with reckless cheer; and this is not a good enough reason for retaining them in Senate”.

Going by most reactions, it is clear that the country’s pioneer upper house members have not live up to expectations.

For one thing, many hope the President will also be considerate in his 30 percent appointments as the constitution allows the President of the Republic to appoint 30 more Senators to make up 100 members.