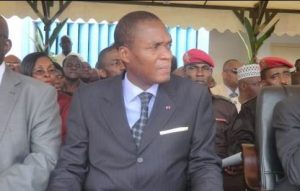 Joseph Beti Assomo, the Minister Delegate at the Presidency of the Republic of Cameroon in Charge of Defense in an exclusive interview with Sputnik spoke about the two security crises facing Cameroon – terrorism from Boko Haram, and the secessionist crisis in two Anglophone regions of the country.

Assomo: Thank you very much for giving me the opportunity to say a few words about our participation at this event — Moscow Conference on International Security. I am leading the Cameroonian delegation. Cameroon is a country in Central Africa and our participation at this Moscow Security Conference is at the invitation of our colleague, the Honorable Minister of Defense of the Russian Federation. And this is a great privilege and honor for our country to be part of such a high summit. We are going to work with our counterparts from the five continents all over the world who have been invited here to Moscow. And when high-level authorities dealing with security matters meet together it is a great occasion to exchange information, intelligence, and experiences concerning the ways we are mastering the security problems in our different countries and regions.

So I will have the opportunity to present to the assembly the situation concerning my country, Cameroon. We have serious problem of terrorism in our country in Lake Chad basin region in Central Africa, with Nigeria, with Chad, Niger, and also Benin. We have there what we call the terrorist group Boko Haram. Boko Haram is a jihadist, terrorist group. We are fighting since something like four or five years now and it is an Islamic organization at the beginning, but now it is simply a terrorist group without any religious doctrine. So we are fighting, but they have money, they have arms, so we think they have international contacts either with Daesh or with other international terrorist groups. And you also know that our border is near the Sahara desert and it is a very important problem for all the countries of the Sub-Saharan region because terrorists are moving in the desert. And we are something like eight or ten countries concerned with this Boko Haram problem. That’s the main problem that we have in the region, especially in my country.We also have secondly in Cameroon a problem of two regions which have decided to take arms and to fight against the central government to get what they call their independence. It is a secessionist group which wants to divide our countries into two. And we cannot accept that, so we are fighting it since a year now. But we have no fear we will win. But what is the problem for us are the international ramifications. We have information concerning the links they have with the 04:41 region and even over the continent of Africa. So that’s the point and I will have bilateral discussions with some officials, from the government of the Russian Federation and we will discuss specific and bilateral cooperation between our two countries. So our participation and our presence here in Moscow is very important for us, Cameroon.

Sputnik: Can you tell me specifically which Russian officials you will be meeting with during your time in Moscow?

Sputnik: So of course you mentioned the security issues in Cameroon regarding Boko Haram. What has been the most recent Boko Haram attack in Cameroon?

Assomo: As I told you, we are fighting Boko Haram since four years now and they are almost beaten but from time to time they operate by suicide bombs and they also kill civilian people in the villages and towns. But their last attack was four days ago, and unfortunately, we lost five soldiers. Just four days ago we lost five soldiers so we are mourning; our army is mourning the five soldiers. So it is a real and serious problem — Boko Haram, but the fight is continuing. It is in the village of Sagme, in the Far North of Cameroon.

Assomo: Yes and we have the means to locate them. But the problem in Sagme, if you have a map, you can look at the map, and you will see that that region is the border between Cameroon, Nigeria, Chad, and Niger so they are moving across the borders of those four countries and we have mutualized our forces. We have created the Multinational Joint Task Force so that we can now fight Boko Haram with our four armies, because four years ago every country went on its way all alone to fight Boko Haram and we realized that it will take time, a long time to win the war against Boko Haram. That is why our head of state decided to mutualize our forces and we have created that Multinational Joint Task Force. And since something like one and a half years we are crushing Boko Haram and we are going to win. But as I told you we know that they have links far from our country. We know that they are receiving funds far from our region, because terrorism today is not located in a single point of the world. It is an international problem, and that is why we appreciate the Moscow Conference on International Security because it is permitted to discuss and to look at ways and mean to fight better this matter of international terrorism.

Sputnik: How many Boko Haram militants would you say are currently on the territory of Cameroon?

Sputnik: Considering the work of the Multinational Joint Task Force against Boko Haram, should the Peace and Security Council of the African Union consider the renewal of its mandate at the end of the year?

Assomo: I can clearly say yes, because when this force was put in place it has a mandate which will theoretically come to an end at the end of this year, but since the situation is not completely solved we are negotiating with the African Union, in Addis Ababa so that they can postpone the delay of the end of the mission of this force until the end of the war against Boko Haram. So we are optimistic, that since the war is not ended, the Multinational Joint Task Force will continue its mission and we hope that we will come to a conclusion in that way with the African Union.

Sputnik: Are you looking for additional support from the African Union against Boko Haram that has not yet been provided?

Sputnik: To what extent will the $5 million pledged by the Government of Japan strengthen Cameroon’s security and aid vulnerable groups, such as Internally Displaced Peoples in the Far North?

Sputnik: Are there any other military projects between Cameroon and Japan this year or in the near future?

Assomo: Indeed, we have an open military cooperation and Japan is not the only or the single partner that we have, so we don’t have to insist only on Japan since apart from Japan we have other partners such as Russia. I do not think it is useful to give the names because those are secret and military problems and we cannot really speak about that in the media, I don’t think so. But it is good news that our country has so many partners and that there is confidence between them and us.

Sputnik: How has the involvement of the UNHCR in the reallocation of asylum seekers due to the secessionist crisis in the North West and South West regions of Cameroon affected Cameroon’s handling of the crisis?

Assomo: The UN is our partner, with specialist organizations such as the refugees organization, such as the WHO, specialist organizations of the UN system. All of them are working with us for the respect of human rights, to help the refugees or displaced persons, to help us in the education of the children of the displaced because of this crisis. I can say that the presence and the cooperation of the UN is really appreciated. We work with them and we are confident that we will continue to work with them. Today you cannot work in a country behind closed doors. It is not possible. You have to open yourself, especially to the UN if you want to something valuable. You must open your doors to the UN because they have to see what is going on… They must be there. It is a kind of humanitarian police and we are not annoyed by that. It is a good thing that they can come and witness what is going on in our country and we are working closely with the specialized organizations of the UN.

Sputnik: What factors are most vital for the resolution of the crisis in the Anglophone regions?

Assomo: Two solutions. Security solution, with the police, gendarmerie, the forces of law and order to bring back security, to protect our territory so that it cannot be divided one day because we have a constitution and Cameroon is and will remain one single state. So we have a security [response], and the forces of law and order are on the field to bring back peace and order. On the other hand, you have the political solution which passes through the dialogue between the government and the opponents, those secessionists or terrorists, but they are Cameroonians even though they are fighting, they are Cameroonians. And the government, the head of state especially, His Excellency, President Paul Biya, since more than a year now is negotiating with them so that they can come back home and leave their arms and behave like citizens and responsible citizens. So the two solutions are on their way so we hope, if God wills, that we come to a definitive solution that peace comes back to our country definitively as it used to be, that development will come back, and that Cameroon will continue to be a place to live.

Sputnik: Are you looking for the support of foreign countries or other organizations to deal with the separatist crisis in Cameroon?

Assomo: We are not closed to such [prospects], but when you have a friend who is in trouble, if you are a real friend, you have to go to his rescue; you don’t wait for him to call and say come and help me. So that is what I can tell you. We are not asking someone to come, but if a friend, a real friend, comes and proposes to help us we will examine his offer. But we are not crying to the world, come and help us, come and help us… We are open to all the opportunities that our partners, our foreign friends can present to us, but for now we are managing the situation within Cameroon, because we say it is a Cameroonian problem.