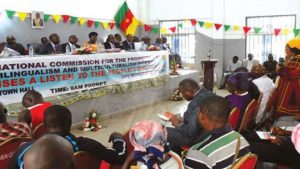 After a two-day “meet the people” working session last week in Bamenda by the National Commission for the Promotion of Bilingualism and Multiculturalism, the body has summarized and published a set of grievances tabled by the people.
In a press release signed by the Head of the NCPBM, Peter Mafany Musonge, 18 major points were summarily brought out from the greivances tabled during the Bamenda meeting last week.

Key amongst the points were the request to open a national debate on federalism which was raised by a cross section of the Bamenda population that attended the meeting.

Other points published by the NCPBM which will be forwarded to the Head of State include speeding up of infrastructural development, a repeal of the law on terrorism, grant general amnesty to those people within and out of the country, jailed or in exile as a result of the crisis.