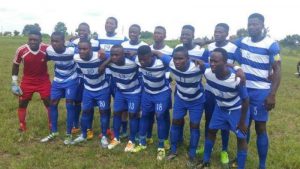 It was a good and exciting weather as the blue sky covers the 1000-seater capacity stadium of the University of Buea, commonly known as “Wembley”, due to it’s outstanding surface.

More to that, it was the derby day as four Buea sides exchanged punches,pitting Buea United against Cinyodev Football Academy, and UB football club against the Catholic University.
In the derby of the day that pitted Buea United FC that had a poor run of form coming off three games without a win, against Cinyodev Football Academy that had lost two of their last previous games.

It certainly was a better of two limping clubs looking for the winning formula.
From the first to the thirteenth minute, Cinyodev Football Academy mounted pressure on Buea United prompting her fans and staff to think that it was going to be another bad day for Buea United.

Nevertheless, Buea United opened the scoring thanks to their maskman  by the nickname “Zlatan” who scored a Diego Costa-like of goal after muscling two people off balance and slotting the ball to an empty net as it went round the keeper successfully.
With his side taking the lead, Buea United gaffer, Enang Severin ensured that they take home the three points. In doing this, Coach Enang put his tactical know-how at its peak during the second half to absorb attack after attacks, and crosses upon crosses from his opponent. In a typical Jose Mourinho kind of display.

When the whistle was blown for the full ninety minutes, there were screams from the Buea United fans who as usual were present to cheer their darling club to victory. This was worthy to be the match of the week for anyone.

Meanwhile, some Cinyodev Football Academy players could not play the game because their licences could not be found by their team staff. this to me, might have been one of the reasons that game Buea United the derby in the victory.

During the first round, the duel between these two sides ended in a 2-2 stalemate.

On his part, the El Supremo of Buea United FC, Valery Kadji, thank God for the victory and also said his players needed to bounce back on winning ways and he believes that with the victory, the club is now on the right track.