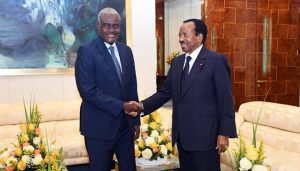 The Chair of the African Union Commission, Moussa Faki Mahamat, has asserted that dialogue is the best way to settle the differences that are fuelling the ongoing Anglophone Crisis rocking the country.

He made the remark at the Unity Palace, on Friday, July 13, shortly after an audience with President Paul Biya. The AU boss, who was on an three-day official visit in Cameroon, condemned violence in all its ramifications.

While stating that the Anglophone Crisis is one of the key issues he discussed with President Paul Biya, Faki Mahamat, a Chadian national, said dialogue is the best way through which both parties can settle the problem peacefully.

He expressed solidarity with the population of the affected areas, promising to transform his solidarity into concrete actions as soon as he goes back. Faki Mahamat reiterated his organisation’s commitment to promote unity, stability and the protection of the territorial integrity of member States. He lauded Cameroon for its uniqueness, saying the country is a symbol for socio-cultural and linguistic diversity.

He called for the promotion of appropriate policies in the national life of the AU member countries so that differences can be better managed to avert the upsurge of socio-political crisis.

The AU Chairperson promised to send observers to monitor the upcoming Presidential election in Cameroon. He called on all actors participating in the election to combine their efforts to make the election to be free, fair and peaceful.

Faki Mahamat expressed appreciation for Cameroon for contributing enormously to the smooth functioning of the institutions of the AU. He thanked President Biya for Prof. Pierre Mukoko Mbonjo, a Cameroonian resource person responsible for the implementation of the AU reforms.

Speaking earlier, President Biya underlined the major role Cameroon has been playing in ensuring that peace reigns in the Lake Chad Basin. He stressed the need for the mobilisation of resources at the continental level to arrest major challenges like Socio-political crisis and terrorism. Such security issues, he went on, have been slowing down economic and social activities and pushing many people to flee their countries.

He pledged his country’s support for the implementation of AU institutional reforms.  President Biya congratulated Faki Mahamat for his election to steer the destiny of the continental organisation. While fighting terrorist groups, Biya said, Cameroon has remained faithful to international norms, notably; the respect of human rights.

“Our principal worry is to bring back peace that will enable the populations to go back to their normal situation,” Biya stated.

It is the second time that the AU Chairman was visiting Cameroon. Just after getting to the helm of the organisation in 2017, he was in Cameroon to thank President Biya for his election. During his three-day visit to the country that began on Thursday, July 12, and ended on Saturday, July 14, the AU boss paid a courtesy call to some members of Government, including Prime Minister Philemon Yang.