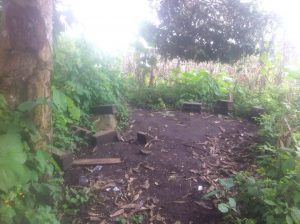 The people of Bakweri Town, Sandpit area in Buea, on Monday, July 30, experienced one of their greatest horrors in memory, when masked elements of the Rapid Intervention Battalion (BIR) moved into Bakweri Town and massacred youths, took some away and executed them in neighbouring Muea, leaving communities behind wailing and mourning their children and friends.

Following the incident, a team from The Post set out tovisit the scene of the killings andget the details from those who witnessed what they described as summary executions.

Most of those who witnessed the killings, sought for anonymity, scared of being identified with the story, for fear of being subsequent targets.

One of those who was with the victims, minutes before the soldiers swooped in narrates: “At about 1:45pm on Monday, we stood around the road, nine of us, discussing. One of my friends made a call, and someone was to send him money via mobile money and my phone was used for the transaction. We separated. I went into my house and he crossed the road moving down to where the BIR later came.

About five minutes later, those who were still outside called me and I came out. After about five minutes, two BIR Hilux vehicles arrived and branched off at the Executive Hotel Junction. The first BIR vehicle carried BIR soldiers all in black attire. The second vehicle came with soldiers in their normal BIR attire with inscriptions on it.

Everyone who heard the shots ran into their houses. We didn’t know what was happening. Some of us thought the soldiers were firing into the air to scare people. After about 15 minutes of sustained gunshots, the guns went silent.Peoplethen came out of their homes. I also came out and we stood by the road, confused about what was going on.The very BIR pick-up trucks came out of the quarters. They drove down towards Sandpit, although they came in from a different direction.

As they drove past us, we heard cries from the direction they were coming from. They had shot some boys who were caughtsmoking. We rushed to the scene and upon reaching there; we saw those who were killed.One of them was my younger brother here in the quarter. He is not an Amba fighter. They are not Amba boys. All they did was smoke. And when you listen to the radio and watch these journalists who have not even come to the scene, you hear them saying, “Amba boys have been killed.” All lies. Let the truth be told, innocent people were massacred.” This account was corroborated by many other eyewitnesses.

Another eyewitness narrates how a corpse was later taken away: “Mayor Ekema came in after we had carried the dead bodies from the gutter where they were killed, up to the road, the T-shirt I wore is completely stained with blood. Thank God we got there earlier and even took pictures of the corpse else they would have displayed guns on them and then claimed that they were armed, whereas they had nothing, not even sticks.

“I recognised two military officers there, one called Joel, and the Company Commander of the Brigade here in Buea. There was a small captain there, he is of the 21st Motorised Battalion, and he had his own crew. They came here. They all cocked their guns, the Mayor holding his own gun, said he is giving us five minutes to bring the corpses outside. About three boys from the crowd asked him who he expects to remove the corpses and hand to them, and where they are taking the corpses to.  The Mayor lifted his gun and trained it on us – a people he calls his own. Finally, they carried the corpses away.

At the area where the boys were surrounded and shot dead, we met an elderly man who has lived there since the 80s and also served for seven years as the Quarter-head.

He said the area, under a mango tree, opposite his residence, where the boys were massacredis a smoking joint where many of the youths, about 30 of them, usually come to smoke. He said, sometimes, “even the military officers come there and smoke and we all see them”.

“I have advised them like an elder to stop smoking, but they usually come there, it is not new.”

Asked what he witnessed on that fateful day, Mola Sam narrated: “I stood outside here, in front of my house, discussing with one of my neighbours who is a Lecturer at the National Advance School of Public Works in Buea. We were discussing what is going on, this Chiefs matter,all of a sudden, we heard: ‘gham, kakakakakaka!’ deafening gunshots, just in front of us.

My neighbour, a man, ran down and even missed the road to his house. He just went down straight, instead of crossing the bridge and going to his house. He was confused. I also ran into my house and locked the door with my family and all of us were lying down on the floor because bullets were flying all over.

Some of the bulletslanded in my kitchen. I told my children to all lie down, and that nobody should stand, because, a stray bullet could hit anyone. They fired continuously for about five minutes, held their fire and then continued again. We stayed in the house for more than 30 minutes until we heard cries outside, when people started gathering.

That was when I came out. I thought they were shooting in the air, because about two weeks ago, the military came here, shot in the air and left. I was surprised that they were actually shooting people in that manner. The boys came here to smoke like they do, but should you kill someone for smoking?”

“I have not been able to sleep since it happened. When it happened, I was not too shaken, but now, the trauma is setting in, the gunshots and those boys who were killed, is what comes into my mind early in the morning, and even most of the times,” he narrated.

Asked whether there is a camp of ‘Amba boys’ around as purported by the present Quarter-head, popularlyknown as Tonga, a retired warder who said the killed boys were in a ‘camp’ and wearing ninja clothing, Mola Samuel dismissed the allegation, saying the Quarter-head has not even been to the scene since the killings took place. He said the smoking joint has been there for a very long time, and sarcastically asked what camp could be under a tree with only sitting stones and with people around not even holding a single machete or knife.

One of the neighbours, a woman living across the smoking joint, where the massacre took place, who witnessed the shooting,told her own story. When we knocked at her door, she was shivering and said she was suffering from a serious fever that was hyped after the continuous and frightful gunshots she heard, and the dead bodies that were pulled from beside her house. Asked whether those killed had been carrying out any suspicious activity, she replied: “No, I know that they are always there, smoking. I have lived here for three years and they have never harassed me or anybody I know.

They just came and killed them there, some escaped, because, when the military shot some of their friends, the remaining ones, came out and surrendered, some carrying their hands on their heads. Then, the military started shooting those who had carried their hands on their heads as a sign of surrender, and, at that moment, they all started running away in different directions. Some of them succeeded in escaping. Some escaped with bullets in their bodies.”

Two of the boys who survived the killings and were captured alive by the BIR were later found shot and dumped in a trash can in Muea. When the family went to take the corpse, they were pushed back by the military. At the scene, we saw caps, shoes and even dresses that were taken off from the bodies of those who were carried alive and blindfolded, only to be shot and dumped in a trash can in another area, Muea. [Muea is about 10 kilometres from Bakweri Town].

Asked the reason for carrying the survivors just to execute them somewhere else, a military source said: “After the Menka incident in Santa in the Northwest, all military units have been advised not to shoot and leave above five corpses in a single spot. So, I guess that is why that unit had to blindfold those boys and then shoot them somewhere else.

The Menka incident tarnished the image of the Government and military, and to keep the international community from asking questions, they no longer kill and leave more than five corpses in a single place. They carry other bodies to different areas and dump them.”

A story is also told of one of the BIR officers who tried to save lives, by first opening fire by only shooting in the air to alert the boys and give them room to escape. One of the survivors narrate that when he bumped into the officer in the course of escaping, the officer held up his gun to his [survivor’s] face, the survivor said he made peace, held the officer’s gun that was already pointed into his mouth and told the officer that he was ready and that he could go on and shoot.

The officer then pushed the boy aside, showed him which direction to run to, and then continued firing in the air. Friends of the survivor said he ran home, visibly shaken, and traumatised and that at that time, he behaved as though he had gone mental.

So far, as at press time, no Government official had made any statement on the killings.