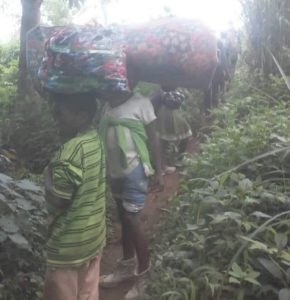 Six civilians fear dead in Bali and several villages deserted in Mbengwi as confrontation between the Pro-independence forces and the Military deteriorates.

In Batibo, Momo Division, the lifeless bodies of three civilians were discovered lying along Batibo-Ambo road on Friday 10, 2018. The three victims sources say hail from Kuruku village in Batibo subdivision.

According to unconfirmed sources, the driver who transported the victims revealed that the three civilians were removed from the vehicle by military at the Army Camp in Ambo village on their way to Batibo under the presumption that they look like Ambazonia fighters.

The driver drove to Batibo with the other passengers and on his way back from Batibo town, he was so shocked to see the civilians lying lifeless some 2 kilometres away from the Army Camp in Ambo-Batibo.

Another resident was shot in front of the Petrol Station in Ntanfoang Square purportedly by security forces who fired gunshots in the early Friday August 10.

Also, the Saint John of God Hospital in Batibo is reportedly stormed by soldiers as they got news that wounded Ambazonia fighters were receiving treatments at the hospital. The invasion by soldiers has compelled patients and medical staff to flee.

It was a similar situation in Mbengwi, Momo Division as prolong gunshots between security forces and pro-independence fighters has made thousands of denizens to flee their homes.

The Tad market was set ablaze and houses along the road in Mbengwi were destroyed. The chief of post of the Kob Village Health Center, Njong Paddisco and his wife, Azah Nancy were shot yesterday Saturday August 11, in Tad Market, near Mbengwi in the North West Region.
It should be noted that Azah Nancy was the Chief of post of the Njaah Etu Health District.

Villages such as mile 19, Njindom, Njinibi, Zen, Nyen, Tudig, Acha villages in Mbengwi have all been deserted. The displacement has been attributed to military invasion in Mbengwi though the government has continued to maintain that security forces are there to protect the population and their properties.