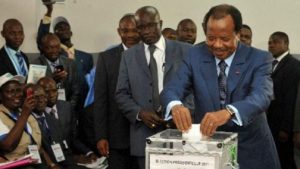 The European Union has urged Cameroon’s President-elect Paul Biya to strive  in uniting Cameroon in a bid to  overcome the troubles it has been facing in recent years.

Paul Biya was declared winner of the October 7 Presidential election by the Constitutional Council on Monday, handing the 85-year old a seven-year mandate to extend his 36-year rule.

The European Union who did not observe the polls only issued a statement on the election four days after the proclamation of the results.

“The European Union expects the President-elect to bring together all stakeholders to overcome the challenges facing the country, to the benefit of all Cameroonians,” a spokesperson of the EU said in a statement.

“While elections were generally held in a peaceful manner, some parts of the population were unable to take part in the vote,” the statement said.

“The EU reiterates its concern about the situation in the North-West and South-West regions of the country.

“It is crucial that the authorities are open to the proposals of civil society and religious authorities for a peaceful and lasting resolution of the crisis, and that a process of dialogue be launched as soon as possible with all actors in favour of peace.”

“Such reforms are crucial and the EU stands ready to accompany such a process,” it said.

“Africa does not need charity, it needs a balanced partnership and Europe needs this partnership just as much,” European Commission head Jean-Claude Juncker said last month.