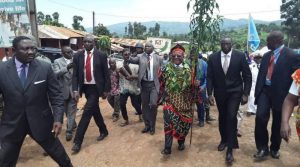 Prime Minister Joseph Dion Ngute is on a four day peace mission in the North West region of Cameroon.

The head of government goes to the North West Region in quest of a direct encounter with a population.

He is bearer of the Head of State’s message to the people of the restive region.

The Prime Minister told the people that the Head of State is open to an inclusive dialogue with true representatives of the suffering masses of the two regions.

He called on all in the bushes to rest their weapons and come to the dialogue table.

Joseph Dion Ngute stated that the situation in these two regions has spared no one, it is time to give peace a chance.

The very attentive population left with the resolve to contribute to peace.