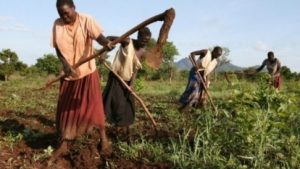 Information technologies are changing the lives of many Cameroonian farmers who previously were dependent on brokers who charged fees to serve as middlemen to purchasers. Now they can use the Internet to find customers more easily and increase their income.

Farmer Loic Domguia sells almost all of his produce online and through phone apps. He’s been using the internet for the last year and say it’s improved his income.

Domguia says before now, they waited to produce before looking for buyers, but through the platform they can work, knowing that they have a precise customer who has already placed the order. He says it reduces the stress on the producer who no longer waits to look for clients. He says they sleep well knowing they already have orders.

Domguia uses a local platform that links producers and buyers, allowing producers to sell directly to the customer without brokers who work as intermediaries. The App even makes it possible for the farmers to receive advanced payments. The application is called Jangolo Farmers. Designers Rose Ngameni says it helps farmers to sell before harvest.

There is also a difference regarding the price when you buy a product on Jangolo Farmer says Ngameni. Since the number of intermediaries is considerably reduced, the buyer gains by buying a product at a lower price and the farmer has a higher profit margin by selling through our application, she says.

Cameroon national institute of statistics reports that 25% of the population is connected daily to the internet and users are more often buying agri-food products online.

Pierre Freddy Ngoudi, Jangolo Farmer User says he is one of those who is benefiting from the electronic trade.

Ngoudi says he makes orders to buy chickens online just because he does not have enough time as he works at a gym from morning till night. Ngoudi says he chooses to place an order online so that it can be delivered at his job site.

The African Development Bank estimates there are more than a billion mobile phone subscribers in Africa, making the market bigger than either the European Union or the United States.