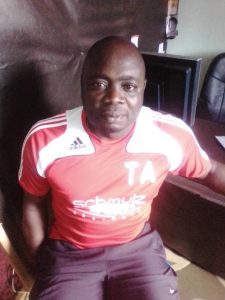 The head coach of high flying Cinyodev FA has urged the present Southwest Fecafoot bureau to continue improving the management of football in the region .

Congratulates the bureau for enabling teams to be able to play on standards facilities which has helped improved the quality of the game and increased the number of fans watching the REGIONAL DIVISION TWO championship.

“I am optimistic by the end of the season we will be able to get a good team to represent the region in the national inter-pools.” Though the increase in the number of fans . There is need for that number to continue increasing from hundreds to thousands. This can be done where fixtures are made available for the media early enough so organs can have enough time to properly educate and inform the public/fans ahead of match days.

Hopes for improvement in all the different departments ; referees, team managers and team doctors in particular where he regrets the fact that most regional coaches acts as Team doctors and coaches simultaneously during matches which isn’t proper.

Security reasons and lack of enough training time ahead of matches are also of major concern. Knowing this isn’t within the reach of the bureau . He urges the football loving public of the region to continue praying for normalcy to return . For the lack of sufficient training time reduces the fitness levels of the players.

A license he had along with the likes of Coach Njoku Barnabas ( Feucheu FC) , Walijon Daniel and Bambot Moses both of Union Sportive of Douala, Nlend Emile (Anafoot) , Chumbong Collins (PNT) , Ayissi Nini Lucas (Tiko United), Jean Bikoko (LIFCA) and Anong Bernadette currently the Assistant Coach of the Indomitable Lionesses of Cameroon.

He is however been assisted in his duty as head coach of Cinyodev FA by former Mount Cameroon FA star Karawa Efficient.