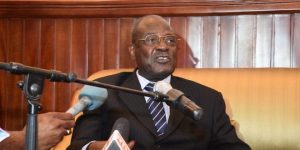 Cameroon’s House Speaker of National Assembly Cavaye Yeguie Djibril on Monday denounced foreign interference in the country’s internal affairs which he referred to as “conspiracy.”

“Cameroon has become an object of conspiracy intended to destabilize the country. To justify their interference in internal affairs, the conspirators pretend to denounce it. According to them, the political system in Cameroon is against all dialogue, upholds violence, and refuses to promote human rights,” Djibril said in the capital Yaounde at the opening of the June session of the National Assembly.

“These allegations are unfounded. The National Assembly condemns and denounces this with every ounce of energy,” Djibril said. “We welcome their support but not their interference.”

Foreign powers in Europe and North America have repeatedly blamed Cameroon government for “lacking the will” to solve the conflict in the English-speaking regions of the country where armed separatists want to create an independent nation.

According to Djibril, the government was “working very hard” to restore “durable peace” and security in the two Anglophone regions.

“There is a proper framework for this kind of relationship and that is what the speaker has been saying today and extending an invitation to the European Parliament for an information and study visit to Cameroon,” Joseph Owona, a senior member of parliament told reporters.